This sexy stallion was wandering around the mountains near Drako's Den when he discovered the kittens home. He snuck in and had a peek around the Den before Drako got home from some errands.
Apparently, this mischievous pony really liked all he saw, for when Drako walked in, in came face to face with this sexy stud...who just so happened to have had a glint in his eye, a smirk on his face, and a flogger in paw. The stallion also had an enema toy and some diapers on the table near the bed.
Needless to say, there was some devious play, and Drako was filled by the stallion and had a few new marks along his neck before they both ended up in diapers.

Shortly after all this, he decided to add a tag to Drako's Collar, claiming himself as the hybrid's big daddy stallion. He also goes out seeking others willing to take turns holding his bitches chastity keys.

This lovely stallion mascot was provided to Drako's Den by ulven 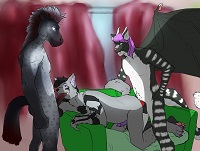 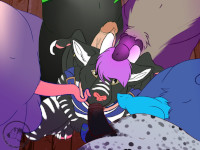 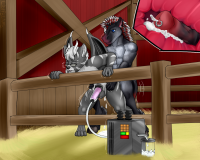 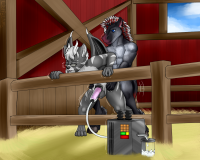