This shy stallion met Drako at an underwear party one weekend.
He saw the kitty in a corner in only black and blue mesh briefs and felt the need to go up and cuddle him.

During this time, he got the kitty to purr rather deeply and melt in his rather strong arms.
This did lead to some wandering paws, and the stallion was surprised when he began to grope the bulge within the kitties underwear.
He realized there was a device on the feline's sheath.

He had to investigate, so he got the chance to remove the kitten's underwear to reveal his caged bits.

Of course, Drako was also having fun with the stallions underwear as well.
This did of course lead to some other things, and Milton decided he had to follow Drako home.

After coming to the Den, he decided to call it home.

We got Milton from TaoBolton 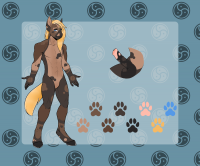